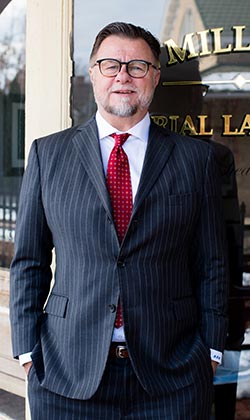 It is with great sorrow that we announce that Michael J. Miller, Esq. passed away suddenly on November 24, 2021.

Mr. Miller was a brilliant lawyer whose passionate and fearless pursuit of justice improved the lives of thousands of people and made the world a safer place by holding corporations accountable when they undermined public safety.

Mr. Miller received his law degree from the University of Baltimore in 1978 and began building a successful practice as a trial attorney in Virginia representing plaintiffs in medical malpractice and personal injury claims. In the 1990’s his practice began shifting to mass torts where he achieved enormous success and became well-known and respected in the field. He played an important role in the Fen-Phen litigation in the 1990’s and served on leadership and steering committees in several mass torts including In re Zyprexa, In re Viagra, In re Avandia, and In re Roundup.

Mr. Miller was a true trial attorney and was never one to back down from a challenge. In 2013 he was the first attorney to try a case against Takeda Pharmaceuticals on behalf of a client who developed bladder cancer caused by the medication Actos. The result: a $6.5 million verdict. He then proceeded to try five additional Actos cases in less than two years in four different states, obtaining verdicts for plaintiffs in four of those cases.

In the landmark In re Roundup litigation, Mr. Miller’s vision and unrelenting passion for justice as co-lead counsel helped force Monsanto to pay over $10 billion to settle claims. This directly benefitted tens of thousands of plaintiffs who developed cancer after using the weed killer Roundup. Notably, Mr. Miller was co-lead trial counsel in the 2019 Pilliod, et al_ v. Monsanto case which resulted in a $2 billion verdict against Monsanto for two plaintiffs. The verdict was reduced to $87 million by the trial court and Mr. Miller successfully argued before the appellate panel which affirmed the trial court’s judgment.

Mr. Miller also represented victims of terrorism. He obtained a $8.68 billion dollar judgment against Sudan and Iran on behalf of 567 Plaintiffs who suffered injuries in the 1998 Embassy bombings in Kenya and Tanzania in the U.S. District Court for the District of Columbia. The judgment was ultimately upheld by the U.S. Supreme Court in 2020. Mr. Miller’s efforts contributed to the passage of the Justice for United States Victims of State Sponsored Terrorism Act, which created a fund that has provided compensation to thousands of victims of international terrorism.

After forty years of tireless advocacy, Mr. Miller’s career was still on the rise. The Miller Firm intends to carry on his legacy: the aggressive pursuant of Justice on behalf of those wronged.

Mr. Miller lived his life as passionately as he practiced law. He was a licensed pilot, sailor, and kiteboarder. He could often be found after work playing guitar with his band or beating his younger associates at tennis or basketball. He started a coffee farm in Hawaii and just recently opened the East of Maui restaurant in Gordonsville Virginia. He leaves behind his wife and law partner Nancy Miller; his six children, and 11 grandchildren. He was a beloved husband, father, son, brother, friend and mentor to countless people. He will be deeply mourned and sorely missed, but never forgotten.